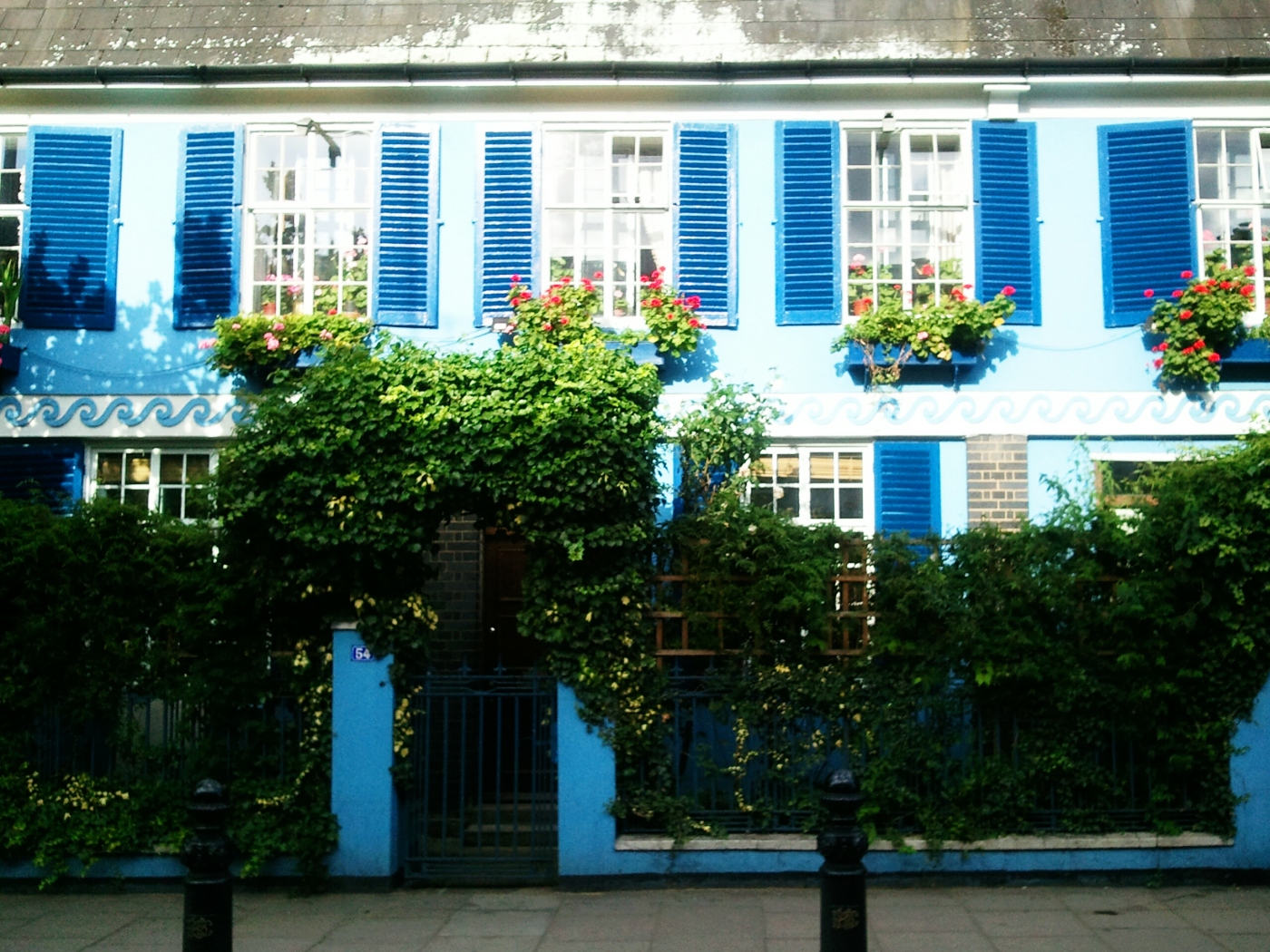 Like many Americans, I gleaned my early knowledge of London from My Fair Lady and a smattering of Disney movies, so thanks largely to Bedknobs and Broomsticks, I had always imagined Portobello Road as a sort of semi-roofed, soot-covered, darkened maze of alleyways.  Which of course has very little to do with the actual Portobello Road.  I also sincerely wish – still, to this day – that the island of Naboombu were a real place, even though it’s run by a murderous lion with a uniquely wrecked accent that’s half American, half pirate, but that’s another post.

In the film, Angela Lansbury’s Eglantine is a witch in training (via correspondence courses), and she’s missing half of a book of spells.  Seeking the rare book seller in the Portobello Road market who might have the other half, she and her kiddie cohorts find themselves in Notting Hill, and they are immediately sucked into the whirlwind of barking shopkeepers, street musicians, and, this being Disney, troupes of dancers – Highland, Indian, Caribbean (my favorite segment) – who spontaneously break out into choreographed steps.  And, of course, there is a theme song:

Portobello Road, I judged immediately, was nothing like the movie version.  No one was selling rare books, for one thing.  And mostly they weren’t selling antiques, either.  Just about every other stall seemed to be selling more or less the same teeny polyester dresses that looked cute enough on the rack but must have been sized for toddlers, since they never managed to be anything but obscene on my 5’8″ frame.  Not that I’m discounting them entirely as useful options.  One dress actually did make it somewhere near my knees, and it traveled with me to Italy for a weekend.  Not bad for five pounds.  Nonetheless, the hawkers of antique porcelain and Edwardian jewels had clearly been replaced by shops selling Banksy reproductions and flimsy, synthetic clothes, most of which seemed to repeat themselves from stall to stall.  But then, Disney never did promise me a rose garden.

But Portobello Road was my front yard, which meant that I had the great privilege of looking at it up close.  Maybe it was the museum training kicking in.  Because you can’t just glance at a painting and really know it, and the same is true of a street, especially this one.  Plant yourself in front of an old master painting for about 20 minutes, and then you’ll start to see things – pentimenti, faint outlines and phantom forms of past compositions and discarded ideas that emerge over hundreds of years; folds in the canvas that tell the story of past storage conditions; dull and lustrous patches of restoration seen in raking light.  Really, you can see several hundred years of history right there on the canvas, but you have to know where and how to look.

Portobello Road was the same way.  Wedged between the sellers of every possible permutation of polyester crap were the legitimate antique shops that managed to hold their ground – places like Susan Antiques, which specialize in antique glass but offer much more, including jewelry.  And more importantly, they offer Susan.  As I was admiring a selection of crystal cordial glasses outside the shop door (on sale for one pound each!), she greeted me and said, “You know, those are very lovely, but there’s just one problem with them.”

I sighed, sure that she would say they were lead crystal and not safe for drinking.  “What’s that?”  I asked.

“You just can’t get drunk with them very quickly.”

I bought two (along with an Edwardian garnet and jet necklace), and I get a good amount of use out of them now that I follow Susan’s wise counsel to reserve them for “all your nastiest medicines.”  Somehow, tea tastes better from a china cup, and Robitussin tastes a little less like shit when quaffed from one’s crystal.  It’s good advice.

Other antique stalls that I had missed after one pass down Portobello Road started to catch my eye, along with modern stores like Stumper & Fielding and the Highland Store, both of which played a part in decorating my Philadelphia apartment.  (The latter, interestingly, sells porcelain as well as textiles, and my Mason’s Ironstone teacup and saucer in Blue Mandalay remain a favorite item.  Apparently the historical advisers of Downton Abbey liked it too, as the Dowager adopted it as her personal pattern.  Ever notice that she always uses a silver teapot with her china?  It’s because no teapots in Blue Mandalay exist anymore.) 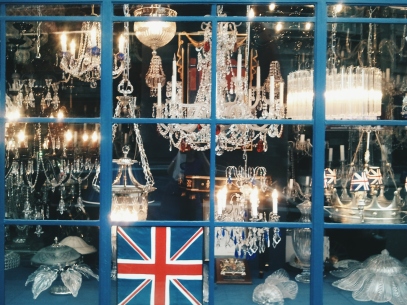 I could have spent the whole summer with my nose pressed against shop windows like this. 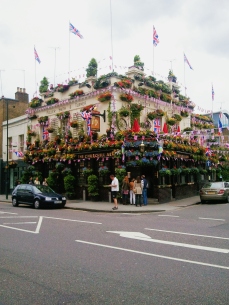 One mild June day, I was walking to my flat, crossing over Westbourne Grove, big-band era jazz was wafting along on the breeze, and I realized that I had been wrong.  Portobello Road was exactly like Bedknobs and Broomsticks.  Maybe it wasn’t darkened and soot-covered (fine by me), but music erupted spontaneously.  And of course there was a carefully choreographed dance, one that I performed daily – hurry past the aggressive stalls selling cheap shit, linger at the lovely silk scarfs in peacock colors, prance across the street in front of the waffle vendor, tiptoe around some creepy guy, pause to chat with the soft-spoken woman with long, silver hair who would always knock five to ten pounds off the price of a 1930s silver teapot.  And just like the film, people of all races and creeds were participating in this pantomime.  English and American mingled with Italian (sooo many Italians – I could even distinguish different regional accents while walking along Notting Hill Gate), Moroccan, and Afro-Caribbean. 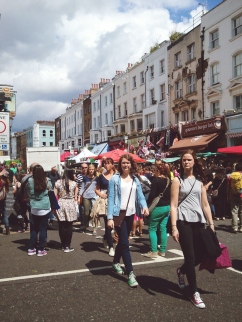 My Portobello Road. The quiet one, just before sunrise.

I think it’s cool now to discount Portobello Road as touristy and clichéd, but I am definitely not cool, so I say go. Buy an antique map, a Moroccan tea set (at Kasbah Bazaar, which sadly doesn’t have a site to link to), a Baccarat decanter, a cheap dress with whatever pattern is ubiquitous that year. (What is it for 2017?  Foxes?  Birds? Or are birds and foxes done? What’s taking over? I nominate the walrus. Thoroughly underrated animal. Or dinosaurs. I could see that taking off – an ironic throwback to childhood jammies, sort of like the onesies-for-adults phenomenon.) Dive in. Listen for the music, and do the dance, because this is one of the most colorful neighborhoods in London, and you already know the steps anyway. The magic is there if you let yourself look.