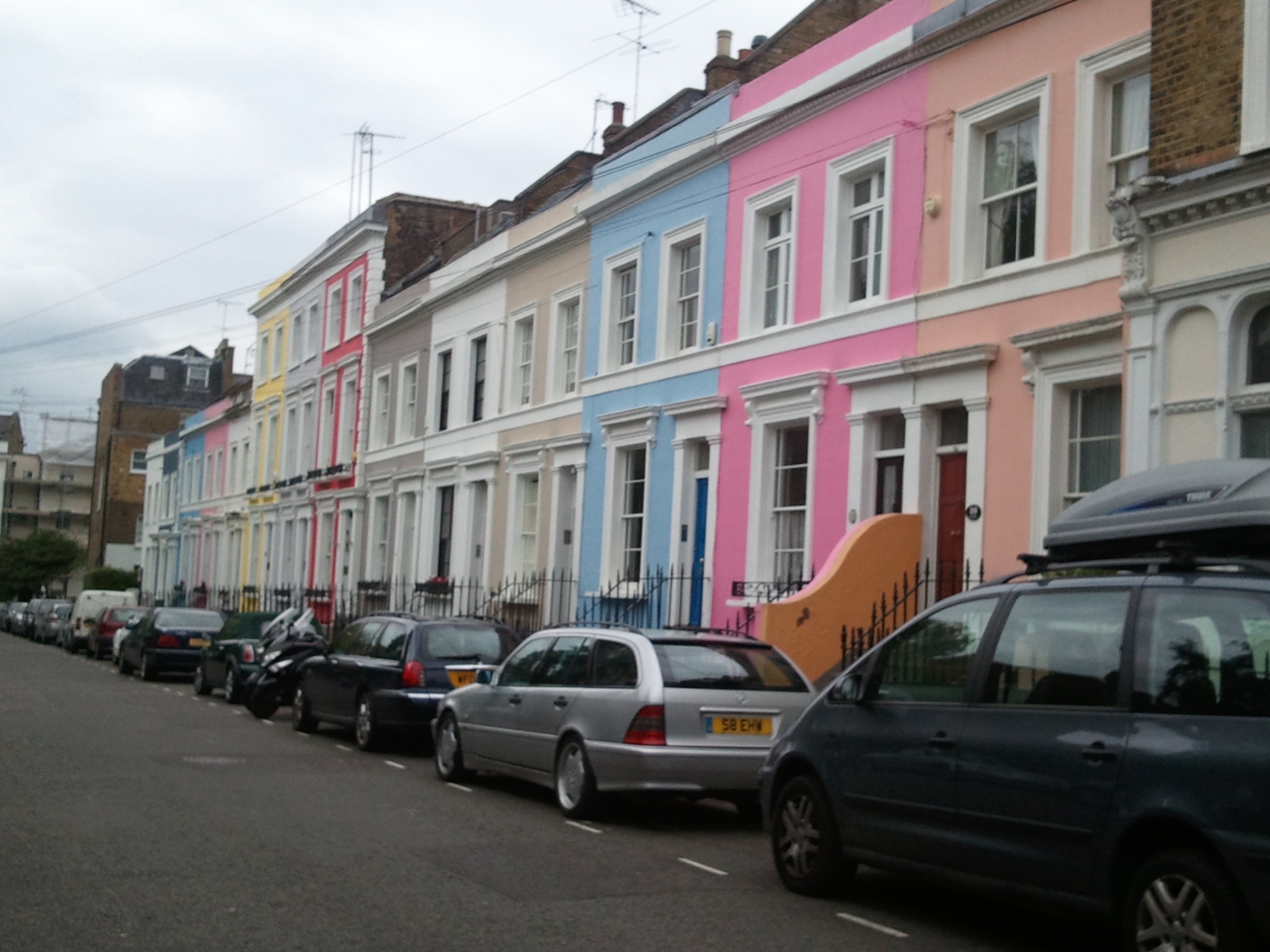 The little abode on Talbot Road was nestled one floor above Pedlars, a charming shop selling quirky, offbeat housewares and lattes that chased away the remnants of jet lag.  This being Notting Hill, it was located behind an equally charming blue door. Not only did it have a functioning washing machine and a shower that didn’t flood the bathroom (a personal checklist; I have my reasons), but it also had style, a combination of Nordic minimalism and pastel palette that lent a sense of airiness. More to the point, this flat had an IQ. And it was way too intelligent for me.

London flats are space-savvy, so everything multitasked.  The coffee table doubled as storage space.  The countertop extended to a breakfast nook.  The wall was a built-in bookshelf, with matching cupboards for linen and clothes storage. Electrical outlets could be found just about anywhere, including inside cabinets.  Everything a flat needed was tucked neatly away, masquerading as something else.  The only homeless item was the vacuum, which was one of those ancient tank-and-hose contraptions that couldn’t fit in anything, including this decade.

Being a tenant of a real, grown-up residence for the first time in the U.K. (the previous summer’s spider-infested broom closet didn’t count) meant never needing to leave the flat in search of adventure.  There were plenty to be found at home.  I got the vague sense that the flat had a personality, and it merely tolerated mine.  I had to research every single appliance aside from the kettle because I couldn’t intuit what any of them were or did.  The washing machine scared the shit out of me. Every washing machine I have ever used in my life offered a maximum of two knobs (temperature and load size – insert joke here) with three settings – hot, warm, cold; small, medium, large.  Some models might offer options for gentle or heavy cycles, but that was the gist of it.  My compact little British washing machine featured a single knob inscribed, rune-like, with no fewer than seventeen different settings.  If you are British, and you have found a need for seventeen different washing machine settings, please contact me immediately and fill me in on this.  Is there maybe one guy in Alnmouth who uses the wools-only program on his Ebac E-Care + 8kg 1600 spin A+++ Dual Fill digital model? (That’s a real thing.)  Why a wools-only program?  Won’t the hand-wash or delicate setting do?  And how does a machine come to have a hand-wash setting in the first place? The explosion of oddly specific settings aside, the thing shook so violently whenever I used it that I was convinced it was about to launch, and I secretly suspected that it doubled as a space probe capable of sending data back from Mars.  Once, I took cover in the bathroom.

If you are British, and you have found a need for seventeen different washing machine settings, please contact me immediately and fill me in on this.

The appliances of 128 Talbot Street were altogether too complicated for me. I had to consult the internet before using anything, from the washing machine (Google) to the vacuum (YouTube). But the most complicated things I ever attempted in the flat were sleeping and showering. To achieve the latter required both Google and a phone call to the property manager. The water would be warm for a few minutes, but then it would always run cold, and I was frustrated.

“Where is the boiler timer?” asked the lovely and patient Foxtons agent.

What the fuck had she asked me? I knew the words “boiler” and “timer” but had never heard them used together. Whilst on the phone with the agent, I had to Google the words she had just spoken, which resolved the first problem (figuring out what the hell a boiler timer was) but did nothing to help me with the second (finding it). God knows what the woman did – file her nails, do her taxes, have a bowel movement – while I frantically opened cupboards and peered behind shelves, but she stuck with me, and she even had the decency not to laugh at me, at least not until she hung up the phone. When I finally found the boiler timer on a pipe hidden just behind the coat closet (cheeky flat outsmarting me again!), the mystery unraveled before me, and I realized that I had been showering just as the timer was shutting off the hot water.

Americans won’t get this. In America, comfort is our top priority. We keep hot water running through our residences at all times – in case we ever decide we need it – but in Britain, you can set it to turn off when you’re out of the flat for a long period of time, or overnight. Perhaps just a smidgen less convenient, but considerably more economical, which is a maxim that I think describes much of life in Britain. Resetting the timer solved my problem. But only after I Googled how to do it.

Arcane script from the 17th century doesn’t faze me, but this nearly reduced me to tears.

Sleeping also proved to be less straightforward a venture than I’d anticipated.  Continuing the themes of resourcefulness and efficiency, the sofa did double duty as a twin bed, which I assumed was where I would be spending my nights.  And so I did for the first three or four, somewhat uncomfortably, but not unhappily.  It wasn’t the softest surface in the world, and the sheets and duvet were oddly large for the futon, but I didn’t ask questions.  And I’d certainly slept worse places, like the Earl’s Court flat I’d rented the year before, and that one Beach Week I thought it would be fun and bohemian to sleep in the car. (It wasn’t.)

I got the vague sense that the flat had a personality, and it merely tolerated mine.

After about a week on Talbot Road, I began to eye with increasing suspicion a blank patch of wall opposite the kitchen. It had long, shallow shelves at the top and tall, narrow cupboards on each side, which left a large, flat rectangular panel in between. There was no way this patch of wall was just sitting there, doing nothing. This flat did not waste space. I put my coffee down and marched over. Like Indiana Jones searching for a trap door, I ran my fingers along the wall, and the panel started to give. What was it?  A bookcase?  Additional closet space?  No, it opened downward…it was a little heavy too…

The mystery of the oversized linens solved, I grabbed my jacket, bag and umbrella,  giggled hysterically to myself, and made my way out the door and down Portobello Road in search of a pub.  It’s the only thing to do, really, when you’re one more Notting Hillbilly trying to make her way in the greatest city in the world.